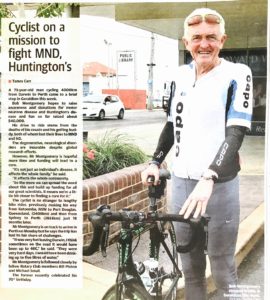 Just picked up the local paper as we left Geraldton.

Let me tell you once we left Geraldton it really was the home straight…although we had over 400kms to go. We had a tight schedule and had to plan our trip to arrive in Perth Sunday afternoon.

We had been told there was plenty to see before Perth. Places like Dongara, Leeman, Jurien Bay, Pinnacles, Cervantes and Ledge Point. Also we were advised to take the Indian Ocean Coastal road rather than the Brand Highway. More picturesque and fewer trucks. 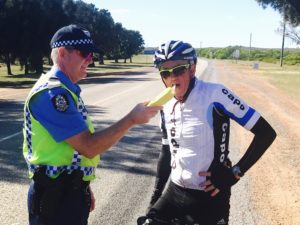 I only had 4 beers, officer 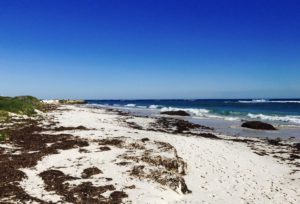 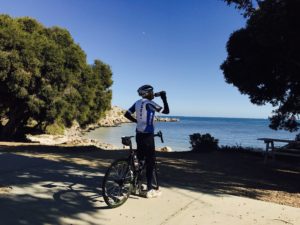 A drink at Leeman

Our first stop only 64km away was Dongara. We stayed at one of the most delightful places Seaspray Beach Holiday Park, located right on the beach, coffee shop and restaurant, grassed sites each with an ensuite! There was a wild windswept beach all to ourselves.  From Dongara we headed south and took the Coast road, leaving the heavy traffic behind. Bob is a connoiseur of bitumen roads and he assures us this was the best. There were some great spots for sight seeing on the way and we made the effort to video Bob with the Indian Ocean in the background.  Jurien Bay was about 150kms away so Bob had an early start. As we headed into Jurien Bay Bob was pulled over by the police to breathalysed. What a hoot.   Jurien Bay didn’t disappoint. Another great spot. This whole stretch of coast is quite touristy and developed given its proximity to Perth. Ledge Point was our last stop before Perth. Another grassy caravan park and they even gave us a freebie. How good was that. Ledge Point has rugged beaches and has its own golf course and country club, where we dined that night – our last night on the road. As we were getting close to Perth the attitude of other road users seemed to change. Plenty of cranky drivers not wanting to share the road. It was stressful riding for Bob and for us in the van. Bob was getting trip tired and it seemed wise to get him off the road before we had a bingle.

And so to Perth on the Sunday afternoon. We decided not to take the van too far in and stayed at Kingsway Caravan Park about 25kms out of town. We had a lot of things to do in Perth with media and getting the van cleaned and the signage removed. We had some media commitments and the main thing was to organise our official finish in Perth at noon on Tuesday. This involved liaising with various Rotary clubs and with the local MND and HD organisations.

On the  Monday afternoon we had a radio interview with Curtin Radio and renowned journalist Jenny Seaton. We had about 15 minutes on air and spoke about the ride and the fundraising. Certainly were able to shed some light on MND and HD. It was somewhat a recurring theme in Perth how difficult it was to get mainstream media interest. We approached all three TV stations and two radio stations. Generally not interested, charity bike rides not newsworthy and they are so parochial. We were even asked if Bob was a Western Australian!  Rotary also,with some exceptions, were all preoccupied with their own projects and really did not get behind it. This is in stark contrast to the wonderful support we had from Rotary in Darwin, Broome and Geraldton.

Bob and Michael at Kings Park

Jenny Montgomery arrived the previous afternoon and Bob had abandoned us to move into a city hotel. Can’t say I blame him. In the morning, we took some photos at the Kings Park. This is a beautiful spot covering botannical gardens and national park, overlooking the Swan River and Perth CBD. A few stills and video of Bob riding through the Park.  The four of us had a nice brekkie there. 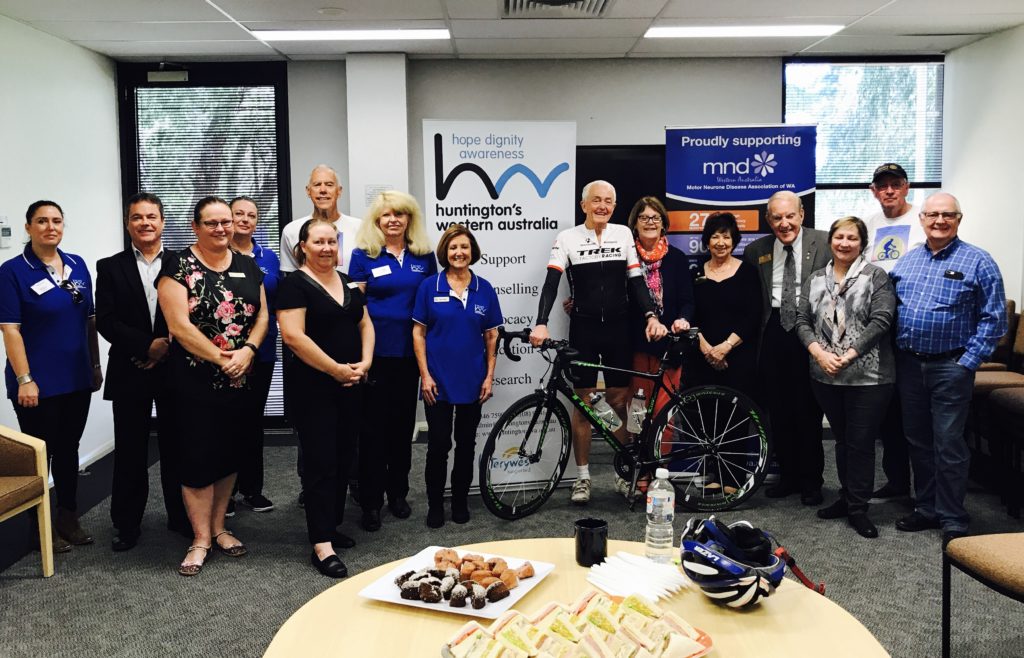 The reception at MND and HD Offices in Perth

We had speculated where to have the formal finish. On one hand we thought about Elizabeth Quay, a very public and tourist location, on the Swan River and near the CBD. Too many permits required and staff from the MND and HD organisations would not be able to attend. It seemed the right thing to do to focus on those we are seeking to help and we changed the location to the Centre for Neurological Support attached to the Queen Elizabeth Hospital. The local chapters for MND and HD are also located there. So at noon on Tuesday Bob put his lycra on for the last time and cycled a km into the finish. Staff from both organisations, together with some Rotarians and other friends, were there. Whilst it was a low key finish, we were surrounded by people who were friendly and supportive, and cared about what we were doing. A few short speeches, a cuppa and it was over. Particular thanks to Diane and Ken Collins from Rotary Club of Freshwater Bay, for their unwavering support and assistance.

From there we packed up, cleaned the van, gave away our excess food to needy people, dropped Michael at airport in the morning,  returned Ivan to Britz, and got our bond refunded. I took a day off on Rottnest Island, planning to fly out at midnight. Jetstar had other ideas and cancelled my flight. I was  forced to spend the night slumped at the airport for ten hours, waiting to find another flight. Bob and Jenny went down to Margaret River for a couple of days. We all needed some space.

More reflections on the trip, learnings and plans for the future to come in subsequent blogs. For now let me say it was a great experience that provides support to those who really need it. It was personally rewarding and I feel priviledged to have been part of it. Bob’s efforts, by any measure, are truly remarkable.