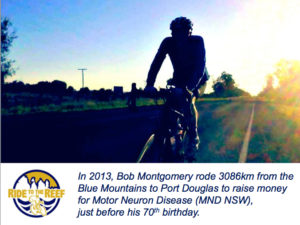 RIDE TO THE REEF

Port Douglas is one of my very favourite destinations in Australia – it’s where the mountains reach the sea. Having done many long distance bike rides previously I had a dream of doing more and the small dream became stronger and it developed into ‘what a great idea it would be to ride from a World Heritage area in NSW to a World Heritage area in Far North Queensland to celebrate my 70th birthday in January 2014.’ 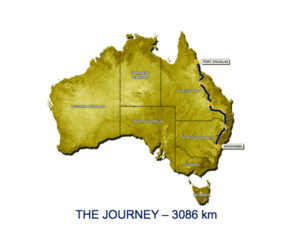 During the planning of the trip I thought that if I was to ride 3,000 kms why not use the huge effort to combine the ride with raising money for charity. At the time my beautiful cousin Judith O’Brien was diagnosed with advanced Motor Neurone Disease so it was an easy choice to dedicate the ride to raise funds for MND.

I commenced this epic ride in early December 2013 on a very foggy and chilly morning from the iconic Three Sisters at Echo Point Katoomba and arrived in very hot and tropical Port Douglas on 31st December to be met by my wife Jenny and some great friends as well as the Mayor of Port Douglas Julia Lieu. However on the evening of Christmas Day I received the sad news that my cousin had passed away. Judith never got to see me complete the ride but on the days when I was hurting both physically and mentally I thought of her terrible suffering and was greatly inspired to keep on pedalling.

The journey had taken me up the north coast of NSW to Grafton where I then rode inland through Toowoomba, Roma, Emerald, Clermont, Charters Towers, Townsville and on up the coast again to reach Port Douglas.

On the trip north I met several people with MND however it was a meeting with a young man from Roma in Queensland wheelchair bound with a wonderful wife and two children aged 6 and 10 years that gave me great inspiration and this was an experience I have never forgotten - the MND slogan is “Never Give UP” and when you meet people like this young man you are truly touched by their bravery , courage and spirit. 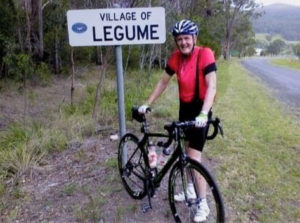 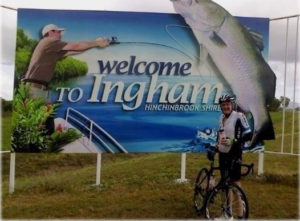 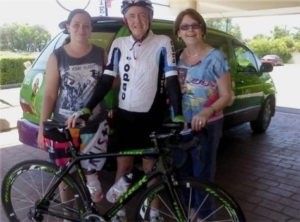