I began my cycling career at the age of 15 years when I used to cycle to work from my home in Bexley (in Sydney’s South) to Rosebery (near the inner city) a distance of approximately 20 kms. I continued with my cycling by joining Enfield-Burwood Cycling Club and going on to win a State Premiership (Junior Division) and eventually becoming a senior A grade cyclist. I have continued with my bike riding ever since competing in a couple of Goulburn to Sydney races, Grafton to Inverell (one of the toughest rides in Australia) and a few ‘Sydney to the Gong’ for Multiple Sclerosis. 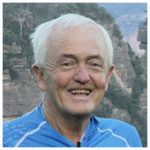 My first long distance bike ride was with a great friend of mine Roy Johnson in August 1981. Together we rode from Sydney to the Gold Coast for Multiple Sclerosis. Along the way we met many MS sufferers including the great Betty Cuthbert.

I started by working career in the cardboard box business as a cadet with a company located at Waterloo in Sydney. This took me through all the various steps of the cardboard box business and I went on to become a Sales Representative and then a Sales Manager at a very young age. I married my wife Jenny in 1967 and we have three wonderful daughters who have since given us 10 delightful grandchildren. We are very lucky to be planning our 50th wedding anniversary next year. 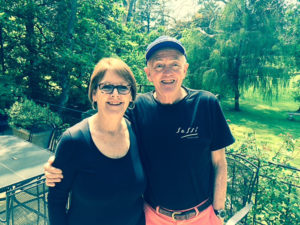 In 1974 I left the box business to pursue a sporting career as a Squash Professional and as a Squash Court owner. I always had a great desire to promote the sport through junior squash and together with Ken Hiscoe (a world champion squash player and one of the best players ever produced in Australia) we established Squash Camps of Australia which proved to be very successful and produced a couple of world champions from Australia. During this time I built and ran two sports centres and a Roller Skating Rink.

About 1987 we returned to Sydney and I went back into the cardboard box business – I started four corrugating companies employing overall 300 people (ACB, JIT, CCP and Austcor) all of which were either sold or taken over. In 2009 I retired but about 2 years later I decided to go back to work in the business I love the corrugated cardboard box business – and that is what I am still doing today.

In December 2013 I embarked on a solo charity bike ride from the Three Sisters in Katoomba to Port Douglas in Far North Queensland a distance of 3,168 kms. I took 26 days to complete this ride and raised $30,000 for Motor Neurone Disease. I arrived in Port Douglas in time to celebrate my 70th birthday on 5 January 2014. 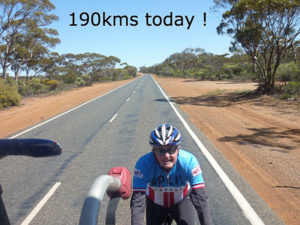 In September 2016 I undertook another long distance bike ride for MND from Perth to Sydney a distance of over 4,000 kms. This ride took me across the Nullabor Plains up through Broken Hill and home to Leura in the Blue Mountains – it took me 4 weeks and 4 days and we raised about $50,000.

A little about what makes me take on these challenges.

Somewhere I realised that I have the ability to dream about achieving goals through physical effort and doing things that take me out of my comfort zone. Whether it be sporting or business dreams if people say you” can’t” then my mind starts to tell me “why not!”

Once I make my mind up 100% then the dream becomes stronger and I know it’s all on the way to starting and then achieving.

I remember working as a Sales Manager in the Smorgans organisation and I remember thinking if Dick Pratt (Visy Board) could achieve his success (he started in a roadside fruit stall in Shepparton) then what was stopping me. So I built my dream and of course I made it happen. Many years later I sat down with Dick Pratt in a restaurant in Melbourne and over lunch he offered to buy my manufacturing plant CCP in Penrith. We did the deal on the tablecloth (butcher’s paper) he gave me the figure and signed and I then took this piece of butcher’s paper to my lawyer and the deal was done. This company (CCP) is still going strong today.

Everything starts with a dream to succeed – this is the same for cycling or whatever you want to do in life.

As well as raising funds the personal achievement you get is amazing and the inspiration and motivation you can pass onto both young and older people is very satisfying and when people ask why I do these rides my answer is simple – I CAN.