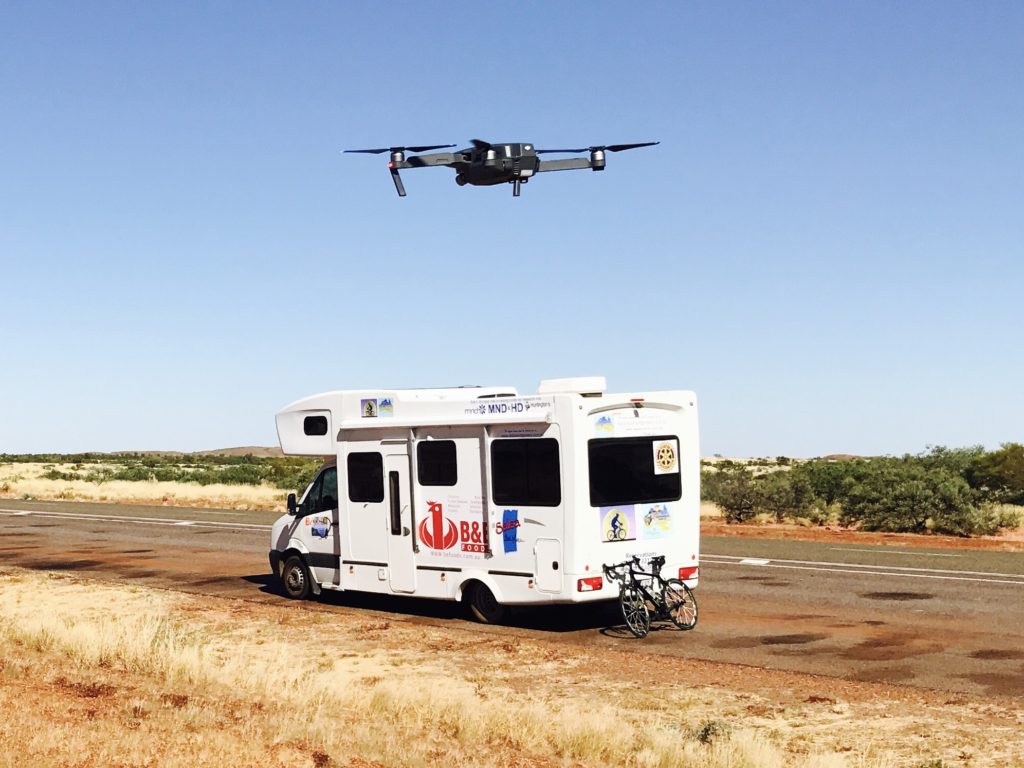 And so we left Minilya Bridge to get the 140kms into Carnarvon completed as soon as possible. We were seduced by a the promise of a cabin and comfortable bed and a day off. But before that we had a play with a drone.

Michael had purchased a shiny drone and had been haranguing Bob for the chance to use his new toy. There were promises of some spectacular photos from up high of Bob in the rugged Gascoyne hills. Now Bob is a sort A to B person, that is, get the job done without fuss or too many diversions. Michael despite having his training wheels on, approached the task with boyish enthusiasm. I was not optimistic about a quick result. Anyhow he got the drone up and hovering over the van. Only problem was it was not transmitting any photos. He pressed buttons, consulted instruction books and made frantic phone calls but all to no avail. Sadly the drone did not resurface on the trip. 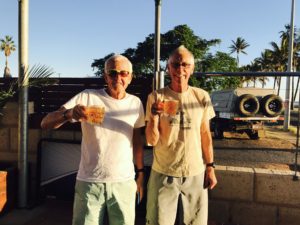 Bob and Bill having a beer at Carnarvon Hotel

Carnarvon was a great town and quite different from the mining towns like Port Hedland and Karratha. The unique location on the coast where the Gascoyne River meets the Indian Ocean. It is recognised for its market gardens, banana plantations, tropical fruits and seafood. The brochure said “a vibrant and diverse community which offers exciting culinary delights”, so we thought a pleasant Friday night was ahead of us. So after checking in at Wintersun Caravan Park, where we were given the A1 cabin. Self contained, two bedrooms, tv etc. Very comfortable. We were afforded these “luxuries” because the owners were friends of Bob’s son in law. It was really appreciated. We moved all our food inside as we no longer had power into the van. We did ten days worth of washing and generally got ourselves organised. Now for the pub and those culinary delights! The Carnarvon Hotel, right on the water, beckoned. A great pub with a top restaurant on a busy Friday night. 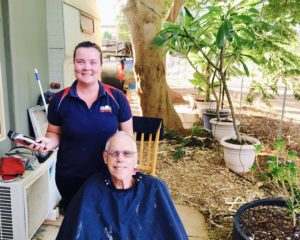 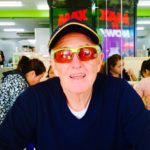 Next morning it was food shopping, and finding the best coffee shop.  I managed to grab a haircut from an entrepreneurial lady at the Caravan Park doing haircuts for $20. When I told her about our ride she handed me back the $20 I had just given her. So chuffed.   The day flew and after collecting our washing we were having a pre dinner drink. Ivan was parked outside our cabin and we thought we would get some diesel rather than in the morning to save time.

Michael started the van…well actually he didn’t because it would not start, and we mucked around for half an hourv before it started. Then when we engaged the gears it shuddered violently (as if the transmission was not engaging. It was very disconcerting and we wondered whether we would get away in the morning. We had a tight schedulev and had media and Rotary commitments in Geraldton. So we called up Britz looking for some guidance.. Now its Saturday night and their service calls are all handled from their HO in NZ, with a 4 hour time difference.. We explained the problem and flagged a replacement vehicle was needed urgently. Well that wasn’t happening they said. They had no vehicle in Carnarvon, spare or otherwise and Geraldton was a bettter bet. We gave them twenty minutes to come up with a solution and after being on the end of a spray from myself and then Bob ratchetted it up another level. The end result was still no result although Bob’s threat to talk to Channel 9 had them jumping! We had to solve the problem ourselves.  After another flurry of calls we found a local RACWA mechanic who took the call from the local RSL He seemed to understand the problem (flywheels, sensors etc) was helpful but there was no diagnostic equipment he could access until Monday. He doubted whether any local mechanic could address the problem. So we had to make a decision. We went back to Ivan, started him up, and he grunted and groaned, like the gearbox was objecting. We soldiered on and took it out on the highway to realise it was only at low revs it shuddered the way it did. So we had to chance it and leave first thing in the morning as planned. Waiting for Britz to find another van was not going to happen. We all went to bed feeling some angst and trepidation about tomorrow.

In the morning we said a prayer that firstly, Ivan would start, and secondlyEach to his own, it would be driveable. It was a standing joke that at prayer time I would pray to Jonathan Thurston and Michael and Bob would pray to their gods. Each to his own and either way, they all delivered! A call to Britz to sanction our decision so that it was their liability not ours and we were on our way and saying goodbye to Carnarvon. As you know 900kms later Ivan rolled triumphantly into Perth without a shudder. Go figure.