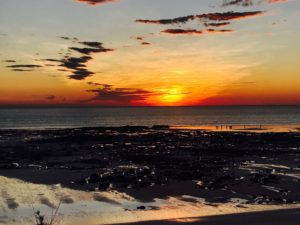 We were all looking forward to Broome. We had been on the road now for thirteen days and some rest and a bit of a look around were called for. Chief cook and all round helper was leaving us after Broome and Michael Small joining us. Also Jan Southern was coming over to see her son and cheer us on. So in many ways four days in Broome was special.  On advice we checked into the Roebuck Bay Caravan Park, ideally located on the shores of the bay and not too far from the town centre but further from the expanding Cable Beach sector. Probably not a good decision to stay there, will explain later. We found a coffee shop at Town Beach and started our time there looking at the view and having our first real coffee for a while. After that we looked around the old part of town, mango trees, corrugated iron shops, red rocks and learnt about its romantic history with the pearling industry and mixed ethnicity.  Plenty of tourists around this resort town, mango trees, red rocks and interesting characters.

From there we took a taxi to popular Cable Beach and Zanders, where we sampled a few brews and watched the dramatic sunset with a camel backdrop. 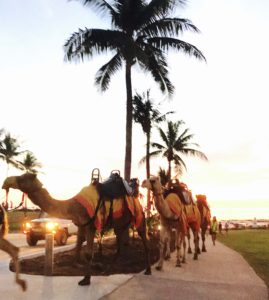 Another taxi back to our caravan park and some chit chat with our neighbours. We befriended a few people and told them about our bike ride, and they mostly made small donations.

We were all a bit intrigued about our neighbours (they were all friendly) and the life they live with their swish  caravans. Some are away for months at a time, and they mostly get settled in  a big park like this one and basically set up another home with all the mod cons they are trying to escape from. They slumber a lot, don’t over exert themselves and retire early. Its like a big retirement home. To each his own I guess.

On the Saturday afternoon Sal and Bob escaped to the mall for a foot pedicure. They they were luxuriating in getting their toes and feet scrubbed, making chit chat with the locals. 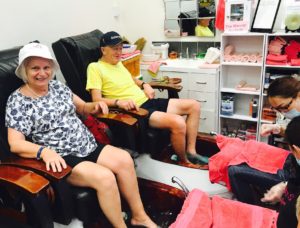 Well, after a lot of cajoling I joined them and the poor lady was aghast when she saw my battle scarred feet. Searching for the biggest industrial scissors she could find she went to work much to the amusement of the other customers.

More socialising with the neighbours and hearing how tired they were from their busy day. 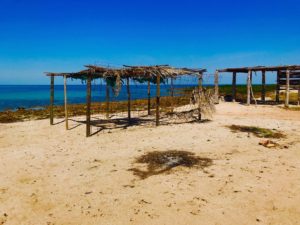 Kooljaman at Cape Leveque is a unique wilderness camp 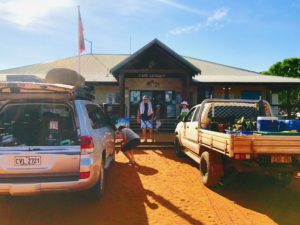 Now Sunday was a special day for Sallee and I. We had the chance for a day off and booked a trip to Cape Leveque, some 200kms north on the rich red dirt road on the Dampier Peninsula. We were sad to leave Bob to his own devices for the day (sob, sob). The whole Peninsula is either government owned, or owned by various indigenous clans. There is little commercial development and it retains its rugged beauty and ancient history. We were driven along with another couple, in a new Landcruiser in a degree of comfort to Beagle Bay, the original pearl farm at Cygnet Bay and then to Cape Leveque itself. Here there is a very good restaurant with an innovative menu using local ingredients and bushtucker.  Locals in Broome will do the 400km return trip to dine there, and wander the beaches with their stunning red cliffs. 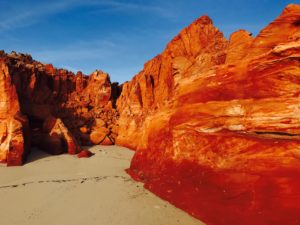 We returned to our camp to find Bob in good form entertaining the neighbours. 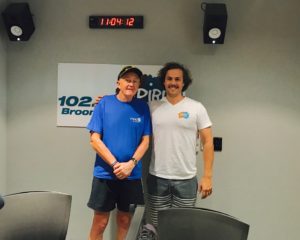 Next day we did a radio interview with Spirit FM. Ivan needed some TLC at the Britz depot, so that was next. Then it was back to Cable Beach to meet Jan Southern who arrived that afternoon. This time we met at the Cable Beach Resort, which is a huge resort hotel and the favoured spot to view the Cable Beach sunset. Jan’s son XX and partner Beccie completed our group and it was a very convivial night. Lots of laughs and good vibes. 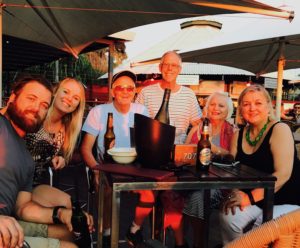 At that moment we all seemed remote to the rigours of  the ride. That was about to change.

Back at that camp we had some more laughs with our neighbours. We were only ten metres from Ivan with screen door shut but not locked. Sal had dumped her bag and purse on top on the lounge inside but on view. When we came back the door was open and purse gone. Sal was pretty shaken and we looked and searched everywhere. Sal was adamant she had not misplaced and it must have been stolen right under our noses. It was a sad note to end the night and we all felt let down. Others in the camp had complained about pilfering.

In the morning we accepted reality, informed the camp managers (they shrugged) and Sallee cancelled her credit cards. There was no cash in the purse to speak of.  She still had a few days in Broome, after we departed, and with no cash, licence or ID she was not happy. Then later that day something remarkable happened. She got a call from the recycling centre in Broome to say they had her purse. It was part of recycled rubbish collected that day that was hand sorted. She had a phone number inside and got the call. Apart from being a bit dirty it was all there less the $20. 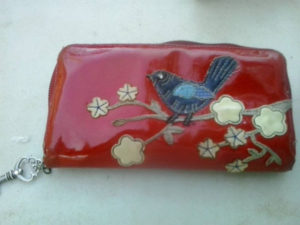 The thief was very responsible and considerate in discarding the purse in the recycle bin. If it had been general waste it would not have been found. Anyhow the honesty of the lady in the transfer station outweighs the dishonesty of the thief. Broome does have it share of social issues and these need to be understood before we get too judgemental. 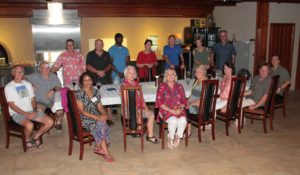 Next day Michael flew in and we made some attempt to integrate him into our daily procedures. A bit of a shock to him no doubt. That night we were entertained by Lyn and Bill Willis from Broome Rotary Club. They invited a dozen members of their Club to their house and cooked up a bbq feast  of beef, lamb and turkey and a range of salads. Their home is something special and geared up for outdoor entertaining.  We had a wonderful night, their hospitality and camaraderie was genuine. They made a sizeable donation from the Club and also some individuals gave something extra. They also gave us a necklace with a pearl setting that we can use at a fundraiser auction in the future. Bob gave a brief talk about our ride and we departed in high spirits. 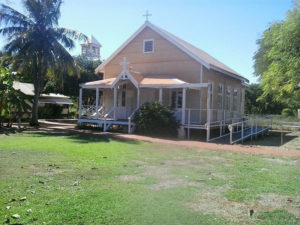 Lovely stroll into Broome’s Chinatown this morning. There is so much history here…indigenous community, pearling, bombing during WW2, beaut architecture and landscapes. 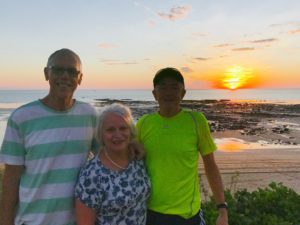 Next morning we were up at 4am to escort Bob out of town to commence his ride again. So ended our time in Broome and fond memories for this beautiful and rustic place. And goodbye to Sal for a month (xx).