We enjoyed our couple of days in Kununurra. Trying to get used to the 2 hours time difference.

When we packed up Ivan and were ready to depart about 4:00am, we had a little misadventure. The last thing to do in the dead of night was to disconnect the water tap hose. But the valve failed and water burst everywhere. It would only stop if Bill kept holding the valve down. Only by holding the valve down could the torrents of water be tamed. Bob was ready to go, Sallee was losing it and Bill was like the Dutch boy with his finger in the dyke.  A long weekend, no maintenance staff around, and all the other wankers in their fancy vans, no one came out to help. They could all hear the commotion but it was not their problem. Bob went looking for help and finally found a man in his pjs to come out with a wrench. If it wasn’t so serious it would be funny.

Anyhow about 60kms north of Warmun we clocked over our first 1000 kms. Long way to go but we are up for it. Warmun RH was uninspiring but Halls Creek promised a different experience. It has high numbers of indigenous folk and tightly manages its alcohol access. We came across this butcher, you got to laugh, very Aussie. 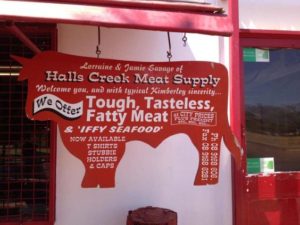 That night ate at the Kimberley Hotel, a modern and busy hotel and restaurant with great food. A real surprise.

Then a 150km ride to Larrawa Station, a few kms of the highway.  Whilst it was unpowered they had good showers and toilets. This was a real find, a working cattle station dabbling in tourism. Ate with the family (Wendy and Kevin), farm hands and some travelling geologists, under the stars. And they had beer which made it a hit with Bob. We chatted and enjoyed their company and solved all the worlds problems. Had to be careful with the geologists though and avoid any criticism of the mining industry. 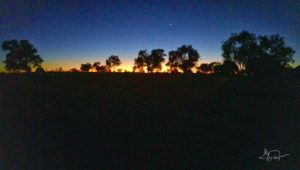 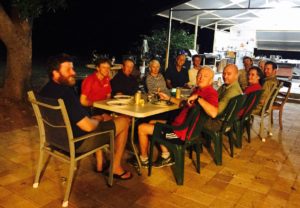 Bob up early and did the 140kms into Fitzroy Crossing.  We had heard a lot about Fitzroy Crossing. It was one of those places associated with the wild NW and the majestic Fitzroy River. When in flood it is one of the biggest rivers in the world. Stayed in a great caravan park where Sal and I had a swim while Bob caught up with his sleep.  Interesting clientele in the bar and Bob witnesses an altercation. Police and security people in attendance. We got the impression it happens regularly and no one seemed too concerned.

When Bob left early the next morning Sal and I had a rare opportunity to check out the river and the famous old low level Crossing. It is hard to imagine how much water goes down there in the wet season. Worth seeing. 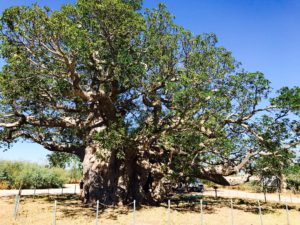 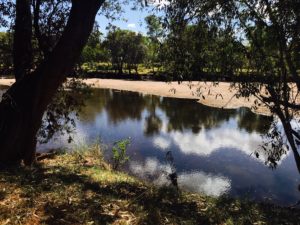 As we had a few concerns where we could stay Bob pulled out his biggest ride so far 232 kms and 10 and a half hours on the bike all the way to Willare RH. He is a really determined person when he sets his mind to something. Not much there though but it was Ok.  All pretty tired by then anyhow.

We have met so many people along the journey, in caravan parks, restaurants, pubs everywhere who come up for chat. So often they have a story to tell about someone they know and their personal experience with MND. It is truly moving.

Our next stop is Broome (next post) and we are all excited as it marks a point in the trip and a few days RnR,