Well the big day has arrived. We woke up to light drizzle and thought…please do not rain.

About 70 golfers turned out for the 4ball Ambrose at Blackheath Golf Club. The day started with a breakfast courtesy of Upper Blue Mountains Rotary. Frittata, bacon, sausages…pretty good really. It hit the spot after last nights festivities. New Club Pro Darrin Waldin briefed the players before they headed off to their allocated tee for a shotgun start. The Gods were smiling as the weather cleared and it finished up being a lovely fine day in Blackheath.

We had a hole-in-one competition at the 13th to win a Mazda2, courtesy of Blue Mountains Mazda.  No one even came close and our “spotter” figured out the safest place to sit was next to the pin!  As usual a million stories of what could have been. There were also nearest the pin and longest drives competitions. 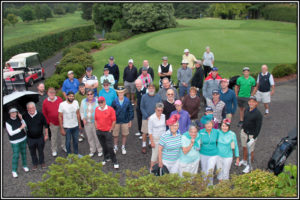 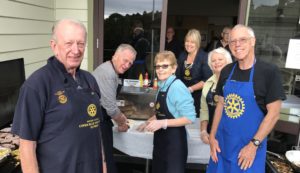 Rotarians cooking up a feast 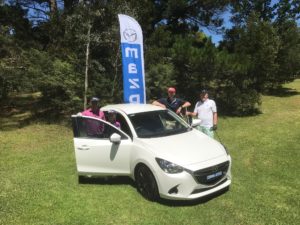 A Mazda up for grabs

We returned to the Clubhouse mid afternoon to the mesmerising sounds of Terry Rae and the Big Swing Band. After a few raffles, silent auctions we moved to the presentations to the golfers. The overall winning team was headed up by Dave Williams.

Bob and Jenny Montgomery made the presentations for the top 3 places, a Bradman for the highest score and the best dressed team.   Graham Opie and Pauline Keyvar representing MND NSW and Huntingtons NSW respectively, spoke about  the plight of those who suffer from these two diseases. They explained how this fundraising helps, where the money goes and the importance of getting the message out into the community. Some more music and drinks and a good day was had by all.

With the revenue from the golf fees, the silent auctions, hole-in-one fees, raffles for meat trays, etc the total for the day was over $5,000.This meant that for the weekend we raised more than $10,000 for MND and Huntingtons. This was, by any measure, an outstanding result. 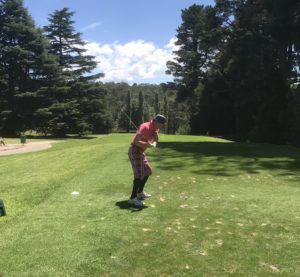 Big Swing on the 13th 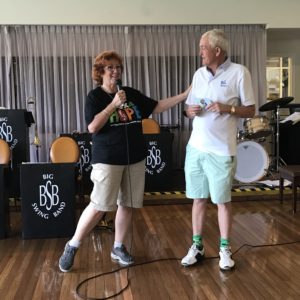 We thank all those who participated in our “Come Out Swinging” Golf Day and the previous nights dinner. All the feedback has been really positive. Blackheath Golf Club has been so helpful and we would like to make the Golf Day and the Dinner an annual event. Watch this space.