Well after weeks of planning our big Charity Golf weekend at Blackheath Golf Club was approaching. We were anxious about the weather after heat, storms and hail in the preceding few days. Anyhow more of that later.

The Blackheath Golf Club were putting on a Sportsman’s Dinner and Bob Montgomery was invited along to talk about his upcoming Darwin to Perth charity bike ride.

With over 100 people in attendance, sharing a glass of wine and good food, comedian Rob McHugh got us started. The night was going to be entertaining and it it did not disappoint.

Bob Montgomery then spoke about his previous charity rides, his experiences and commitment. He has already raised over $80,000 for MND after his Sydney to Port Douglas and Perth to Sydney rides. He then spoke about the Darwin to Perth ride leaving in mid May, some 40 days, and 4000km. Not bad for a guy in his seventies. This time we have a challenging target of $100,000 with funds being shared equally between MND and Huntingtons Disease.  This golf weekend is an important part of the fundraising. Bob thanked his key supporter and partner in all these endeavours who is, of course, wife Jenny. He also thanked Upper Blue Mountains Rotary for their continued support and friends Bill Pixton and Michael Small will be on the road, driving the van from Darwin to Perth. 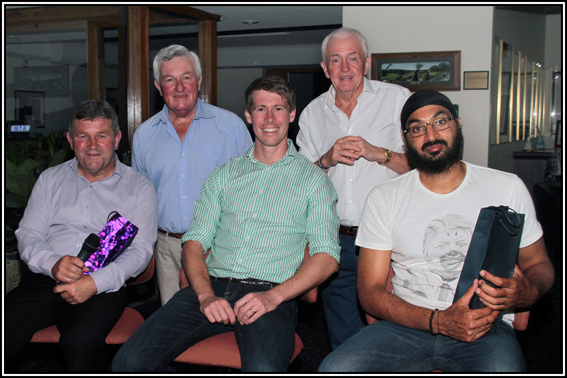 The guys were skilfully interviewed in a panel setting by Rodney Tubbs from Blackheath Golf Club, encouraged to tell a few stories and answer some tricky questions. They were all quite different types of people with various sporting backgrounds.

Royce, humble in his achievements, and in his slow talking, laconic style had us in stitches over old football stories. I will never forget jackhammers and Mal Meninga. Royce is now working with the Penrith Panthers to build up their corporate support base.

Ed was a sharp, thoughtful and motivated person. Taking on a technically complex event in the modern pentathlon was always going to be challenging. In virtually 3 1/2 years from scratch he made the Olympic team and finished a remarkable 27/111 in the field. He is now a budding property developer and in his spare time will be riding wild horses in Mongolia next year.

Monty was Monty. Not bound to follow any expectations, he artfully avoided the difficult questions. He was original and refreshing, with a unique delivery style. He is now playing club cricket in Sydney and recovering from a chronic shoulder injury. I’m sure he still harbours dreams of playing cricket again for England. You never know.

After the sports panel, everyone was in  a great mood and really enjoying themselves. A perfect time for our auctions . We had some wonderful prizes courtesy of our sponsors Wolgan Valley Resort, Bonville Golf package, a fishing charter with Andrew Ettingshausen (aka ET of course) and a signed 2017 Penrith Panthers jersey. With an enthusiastic bidding response from our audience and, after passing the bucket around (it was actually a wine cooler), we raised over $5000.

All money raised goes equally to MND and Huntingtons Disease. We thank everyone for your generous support.