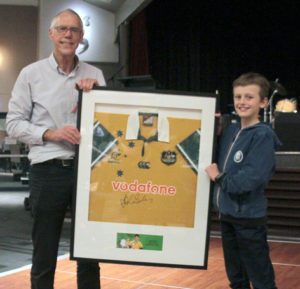 Hi everyone, today I’m telling you guys how riding 4000km is making a difference.  My grandfather has done two huge rides over the past 4 years for Motor Neurone Disease.  In 2013 he rode from Katoomba to Port Douglas, which was 3086 km, and in 2015 he rode from Perth to Sydney which was 3800km. this one is going to be about 4000km which means he’s going to be riding 200+ km a day.  This time he’s also raising money for Huntington’s disease, which does a lot of the same things as MND.  He set off yesterday and is hoping to arrive in late June.

So what actually is MND and Huntington’s disease?  MND and HD.   Well, they’re both diseases that affect the way your brain sends messages to the rest of your body.  They both affect the way you can walk, talk and behave.  Here are some videos on what HD and MND are. (Play clip.)  Even though the video said you would survive with MND for about 3-5 years Stephen Hawking has survived for more than 40.

As I said before he has done two other rides so here’s a video where he was on the news after he finished riding on the Nullarbor.  (Play video).

Now after all the money he has raised and all the kms he has ridden he is riding again and it’s going to be longer and hotter than ever.  This time he’s going to ride from hot humid Darwin to boiling hot Perth, and he’s got to ride 200+ km every day in 1 month.  He’s riding 4000km, in boiling weather, and a caravan to live in.  Easy right?  He’s doing all of that and all we have to do is walk the huge distance from the couch to computers and do the devastating, difficult talk of getting on to his website and give a couple of dollars for people who can’t walk talk and can barely breather.  Wow, what a difficult task.  You seriously have to go to his website in your lovely air conditioned homes and give a couple of dollars to a great cause.  By the way you can spend as much or as little as you want.  I’ve already donated $800 by buying this John Eales Memorabilia, which is the jersey he wore in his last game when we won the Bledisloe cup.

Overall please donate as much as you can, every cent counts, let’s smash our goal of $100,000 because it’s a great cause and too many people are affected by these two horrible diseases.  We need to raise awareness, money and support for everyone affected.  Thank you for listening and let’s beat MND and HD.

This video shows some of Bob’s last ride from Perth to Sydney 2016.